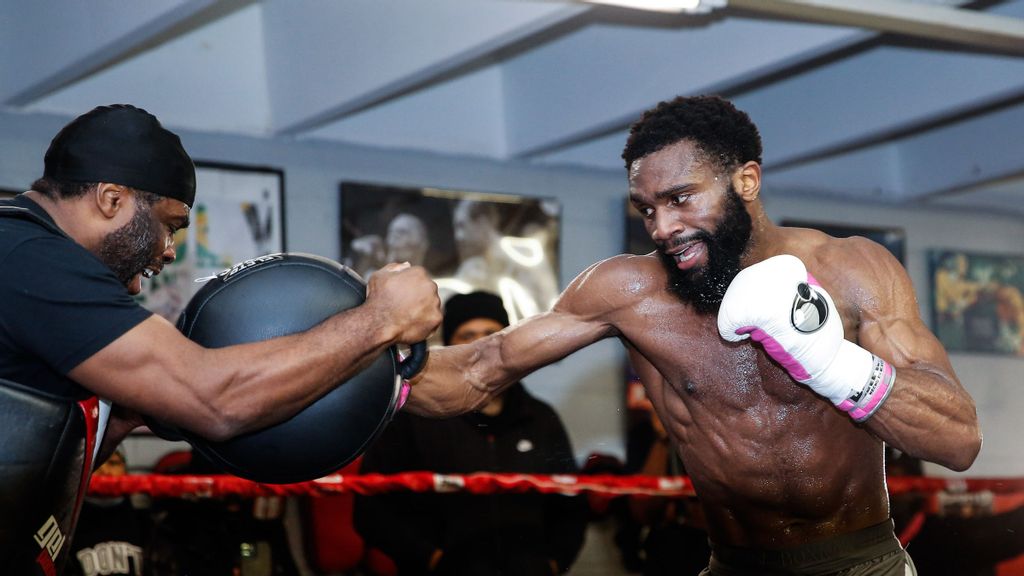 That pattern is unchanged for Ennis (29-0, 27 KOs) in advance Saturday’s IBF interim welterweight clash with Karen Chukhadzhian (21-1, 11 KOs) of Ukraine, against whom the switch-hitting Philadelphian seeks his 20th straight knockout at the Capital One Arena in Washington, D.C. on Showtime Pay Per View (9 pm. ET/ 6 pm PT).

The 25-year-old Ennis has ranked himself the No. 1 welterweight ahead of left-handed IBF/WBA/WBC champion Errol Spence Jr. (28-0, 22 KOs) and his unbeaten switch-hitting WBO counterpart and three-division champion Terence “Bud” Crawford (39-0, 30 KOs), and has continuously called them out.

“I feel like Errol Spence Jr. would fight me,” said Ennis, who has scored 21 knockdowns in his past 11 fights and is believed to have won every round of his career. “I’m going in there with the intention of winning the interim title, then fighting Errol next. I think we can make it happen.”

“Boots” already has his sights on testing himself against the likes of undisputed IBF/WBA/WBC/WBO 154-pound champion Jermell Charlo (35-1-1, 19 KOs).

Closer to reality for Ennis is a clash with 29-year-old division rival Rashidi (Speedy) Ellis (24-0, 15 KOs), of Lynn, Massachusetts, who faces Roiman Villa (25-1, 24 KOs) of Venezuela on Saturday’s undercard.

“Rashidi Ellis is next. That’s a great matchup,” Ennis said. “It’s all about fighting the best. I want to fight all the top guys and the guys that everybody knows.”

Ellis is equally keen on facing Ennis should he get beyond Villa.

“I feel like I’m the future of the welterweight division. If a fight with Jaron Ennis comes my way, why not?” Ellis said. “I’m ready. I’m smart in the ring and I adapt. I don’t think people know about my power. I’ve got some thunder to go with my lightning.”

But Ennis must first handle Chukhadzhian, who has stopped 11 opponents in 20-consecutive victories.

“I’m very motivated for this fight. There is a lot for me to prove in my first fight in the U.S. This is definitely going to be a hard fight, but I’m ready for it,” said Chukhadzhian, who scored his fourth straight knockout with July’s sixth-round stoppage of Blake Minto.

“I’m preparing to come in and win.I only have good things to say about Jaron. He’s a very high-level boxer. We’re watching each of his fights and specific moments in those fights. He’s on the same level with the champions.”

Ennis is not so much looking past Chukhadzhian as looking to go through them in similar fashion as former heavyweight champion Mike Tyson.

“It’s safe to say we’re looking to have a short night on January 7. I’ve just been watching a lot of Mike Tyson myself,” Ennis said. “He put a lot of punches together. Triple, doubles, same hands, lots of knockouts. He didn’t see too many late rounds. I’ve been watching him a lot during this camp.”

Spence was ringside in May at the sold out Dignity Sports Park in Carson, California, when Ennis delivered his 19th straight knockout against previously unbeaten Custodio Clayton, who entered at 19-0-1 (12 KOs) before being floored and stopped in the second round.

Ennis’ right hand landed just above Clayton’s left ear with 28 seconds remaining in the round, flooring the Canadian.

Clayton crumpled to the canvas, unable to regain his feet as he wobbled around the ring and ultimately into the ropes before referee Ray Carona waved an end to the fight at the 2:49 mark.

“Anybody right now can get it, but I’m the IBF’s No. 1 contender. I think the big fish [Spence] is here himself,” said Ennis, speaking directly to Spence during a post-fight interview with Showtime’s Jim Gray in the ring.

“It’s time to go fishing. I’m either going to fight Errol Spence Jr. or Terence Crawford, or fight for a vacant belt. It doesn’t matter to me who I’m facing. I want everybody and anybody. They can line ‘em up, and I’ll knock ‘em down. Doesn’t matter who it is.”

Spence attempted unsuccessfully to make a fight with Crawford, having vanquished Yordenis Ugas by 10th-round stoppage in April to add Ugas’ WBA crown to his IBF and WBC versions.

“The only thing holding us up is that we knew Spence was the mandatory,” said Bozy Ennis, Jaron’s father and trainer. “But we knew he was working on the fight with Terence Crawford. We’re definitely looking to fight three times next year now.”

Ennis’ demolition of Clayton continued the Philadelphia native’s pattern of destruction in the ring, highlighted by his ability to finish off opponents faster than more accomplished fighters previously had.

Dulorme was dominated more than at any previous time in his career, having lost decisions to Ugas and unbeaten Eiamantas Stanionis (14-0, 9KOs), by sixth-round TKO to Crawford and battled to a draw with two-division champion Jessie Vargas.

“I feel like I just have to keep winning and doing my thing. My motivation is to one day be undisputed at 147 pounds,” Ennis said. “I’m motivated every day, so this is just another day in the office for me. On January 7 it’s another step toward me getting my hands on those titles.”