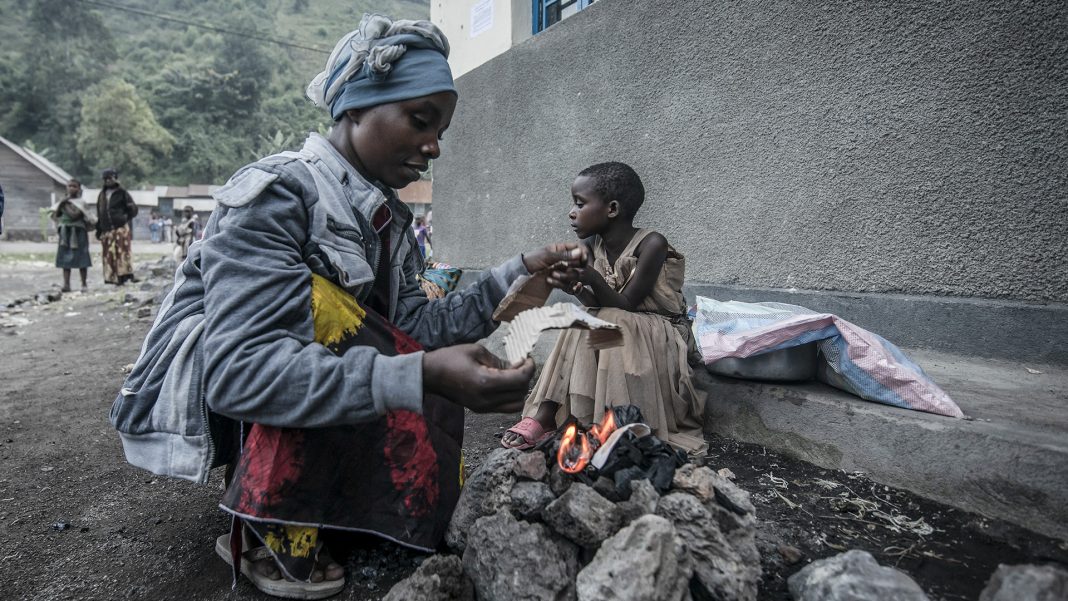 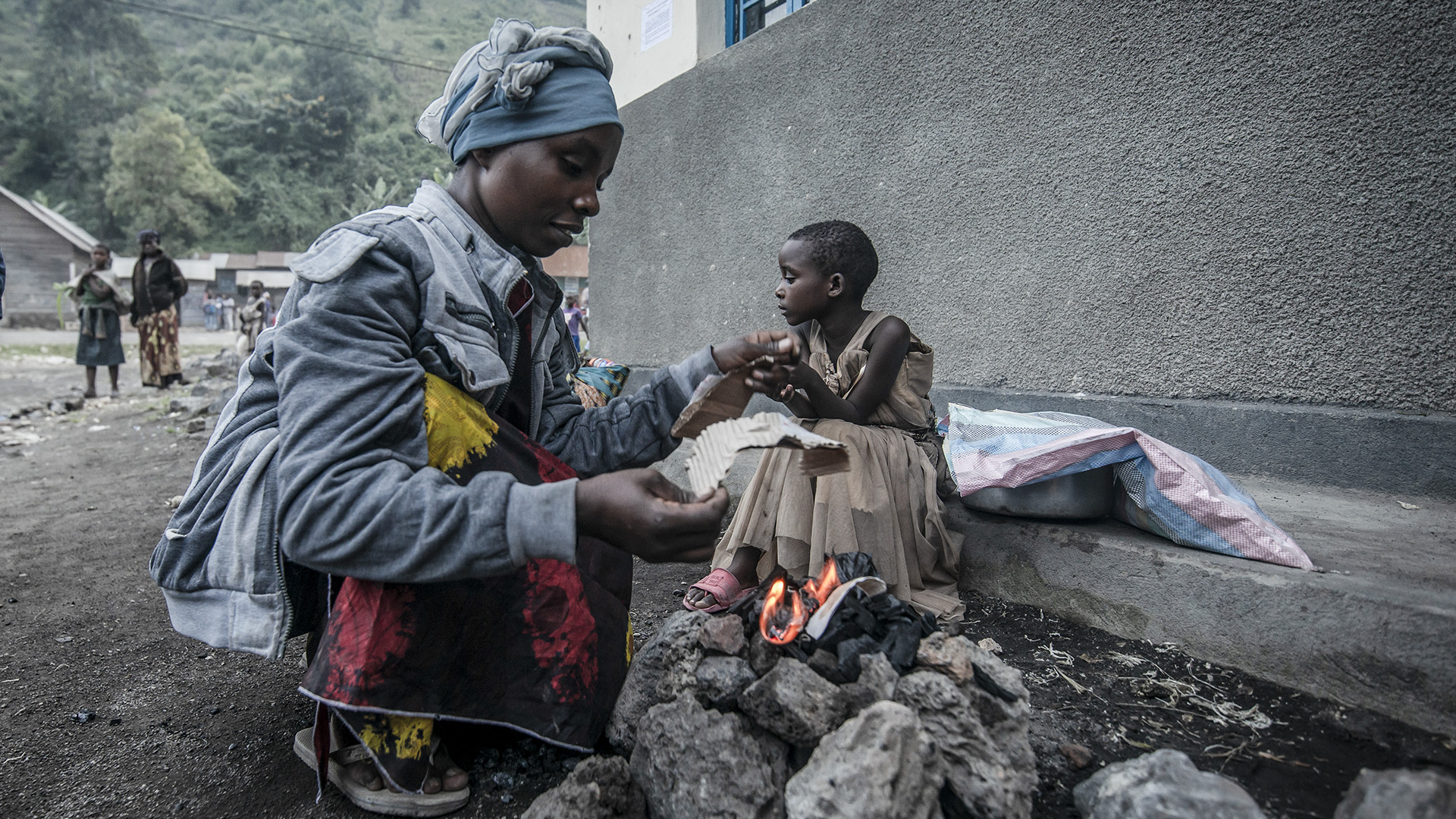 “As you can see, I am in bad shape,” she told Zenger News.

“I am married, but my husband had a seizure on the day of the eruption and since then has been unable to support our family. So, I am caring for him and our children all alone.” 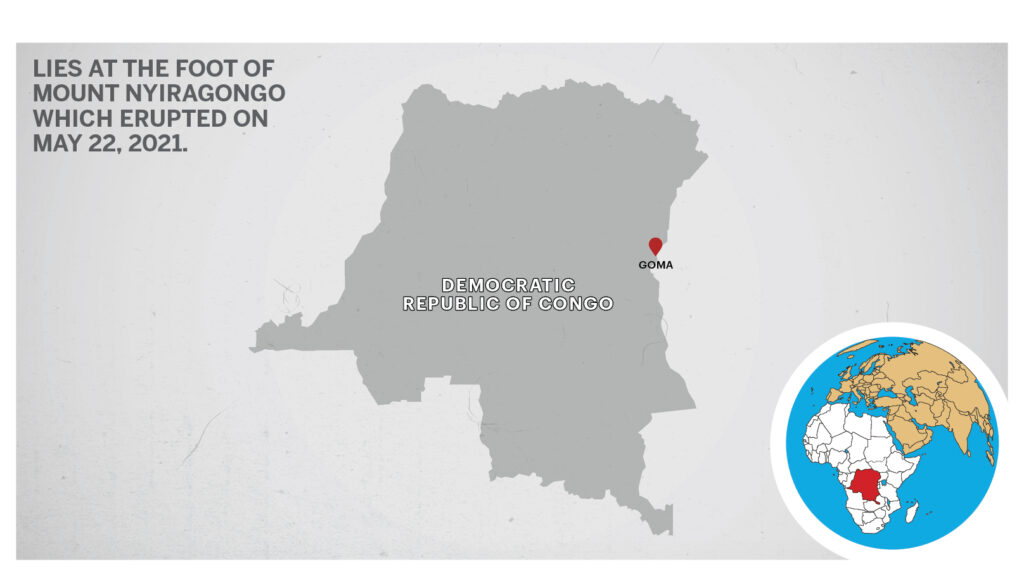 She used to stay in Bushara village near Goma but escaped towards Sake, a Goma suburb, as red-hot lava flowed from Nyiragongo and overran their home, reducing everything in its path to ashes.

“We fled with the clothes we had on our backs that day. Initially, we took refuge in a local schoolyard, but we had to spend our nights on the bare ground, without blankets. Those who had some little money bought tarpaulins to cover themselves. My children [aged 7, 5, and 3] have not gone back to school since our return to Goma more than a month ago. We do not have shelter, clothes, or food. It’s harrowing.”

The eruption killed at least 32 people and displaced more than 232,000.

Survivors are still filled with sadness because of the properties they lost and because they still live the nightmare of the incident more than a month later, spending their nights under the open skies, going without food or a bath for days.

Patricia Katungu Siviri, a widow, is one of the many people whose homes were destroyed by the lava, forcing her and her eight children to fend for themselves in the streets of Goma.

“The lava consumed our house, and we had to abandon it,” she told Zenger News.

“We left with nothing. Since we returned, we live and sleep outside on the streets. We have to beg for food. I will never forget this moment because it is the worst time of my life.”

Survivors of the incident blame the government for offering little or no help.

“The Congolese government has abandoned us. We haven’t received anything from them. So we are making do with the little we have,” Katungu told Zenger News.

President Félix Tshisekedi, accompanied by his wife and First Lady, Denise Nyakéru, visited Goma on June 15, three weeks after the eruption, to assess the damage done to the city.

He promised the locals that the government would rebuild all houses destroyed during the eruption.

“Hello everyone, we cannot help but sympathize with you,” he said in one of the meetings in Goma.

“My wife—your mother—and I are always by your side, and we will never leave you.”

He again visited the city on June 26, when signing bilateral agreements with his Rwandan counterpart Paul Kagame.

As the more than 670,000 inhabitants of Goma were preparing to enjoy a peaceful Saturday evening on May 22, Mount Nyiragongo, one of the world’s most active volcanoes, located 18 kilometers (11 miles) north of Goma, North Kivu Province, was ready to erupt.

At around 7 p.m., a woman who only preferred to be identified by her first name, Beatrice, 26, was selling her wares at a market in the Kisoko area of Goma when she saw people running around and shouting “volcan inatomboka”, Kiswahili for “the volcano is erupting”.

“I felt like I was in a dream,” as the night sky was turned fiery red by hot lava and gases spewing out of the mountain, said Beatrice, a mother of two boys.

“In the morning, when I did laundry, it was so calm. I could not believe that it had suddenly turned into a beast.”

Due to lack of accurate information, Beatrice thought it was Mount Nyamulagira, another active volcano in the Virunga Mountains range, that had erupted but was mortified when she realized it was Nyiragongo.

“I lost all strength. I was thinking of my children and, at the same time, of this small business that allows me to survive. Run after my children or collect my wares first? I was in a dilemma. In the end, all I took was a flashlight and the little money I had earned that evening before the eruption.”

Beatrice ran a small business, selling foodstuff, such as tomatoes, onions, groundnuts, and cooking oil, which she sold out of a basin.

“There was too much movement. I could not collect everything on time, so I left with what little I could carry under my arms. The sky was so red. When I finally arrived arrive home, there was nobody. My children were not there, and neither was my aunt. I asked neighbors, but no one saw them leave. I was so worried.

Eventually, Beatrice reunited with her children and aunt, who gave her and her two children sanctuary after her husband abandoned them more than a year ago.

“We are safe, but the lava swallowed my aunt’s house which we were staying. I do not know how we will continue to survive since I no longer have a business to bring in some income.”

The May 2021 eruption was the most catastrophic since January 2002, which killed approximately 100 people, and displaced 400,000 more. Another eruption in 1977 killed an estimated 400 people.

While many of Goma’s residents, mainly residents of the city’s north, moved towards Sake, 27 kilometers (16.7 miles) west of Goma, others took refuge in the Rubavu district in Rwanda. Others choose to go to neighborhoods west of the city.

Lava flows from the mountain down to the villages were widely shared on social networks. Around 3 a.m. on May 23, 2020, local time, the lava flow lost momentum, sparing Goma City, but not before devastating the locality of Buhene.

Inhabitants of Buhene, whose houses were spared by the lava, said they were robbed by youth from different Goma districts, pretending to help move them to safety.

“I lost some of my belongings before my house was destroyed by the lava,” Kasereka Kanamungoya told Zenger News.

“Some young people made me believe that they were helping me by moving my belongings but robbed me.”