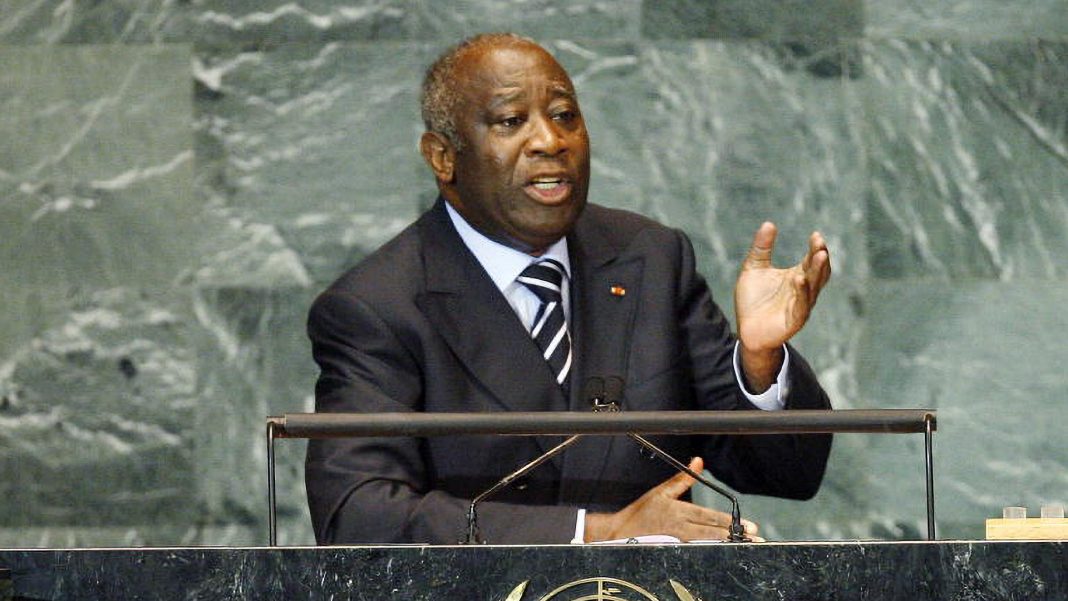 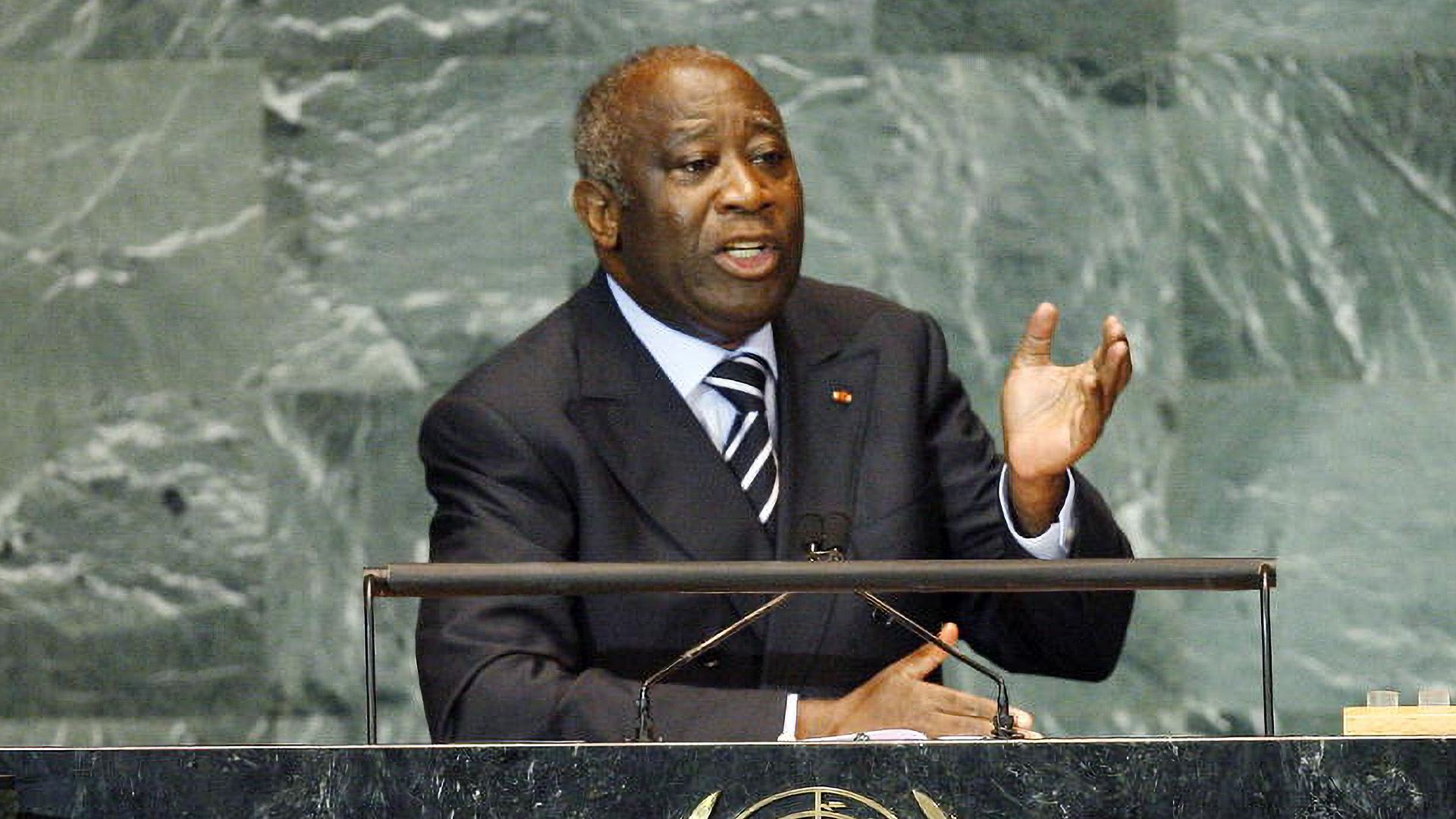 ABIDJAN, Côte d’Ivoire — Less than a week after his raucous return to the Ivory Coast on June 17, following an acquittal by the International Criminal Court, former Ivorian President Laurent Koudou Gbagbo divorced his wife, Simone.

Huge crowds in the capital Abidjan welcomed Gbagbo, who was charged in 2011 at the International Criminal Court in The Hague, Netherlands, for crimes against humanity and war crimes.

The court brought charges against him after he declined to accept the November 2010 presidential poll, won by his rival, Alassane Ouattara, sparking a civil war that left more than 3,000 dead.

The Appeals Chamber of the International Criminal Court, on March 31, upheld a 2019 ruling of the Trial Chamber that prosecutors had failed to prove their case against Gbagbo and Charles Ble Goude, the youth leader of the Ivorian Popular Front party. 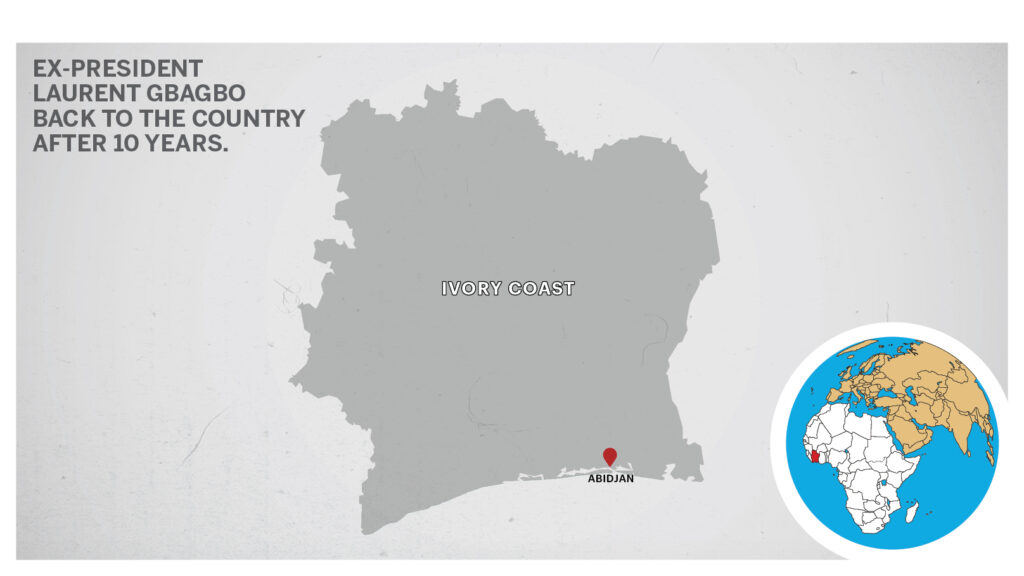 During his appeal, Gbagbo lived in Brussels, Belgium, but his acquittal by International Criminal Court’s appeal judges allowed him to return home at Ouattara’s invitation.

Police had a hard time controlling masses of his supporters who lined the streets and highways of Abidjan as they awaited him to land at the Felix Houphouet-Boigny Airport on a commercial flight from Brussels.

On June 16, a traditional ceremony was held at his hometown, Mama, to welcome him. It is unclear how long he will be in Abidjan before he visits his mother’s grave, who died during his trial.

A delegation of women vendors at the Riviera Palmeraie market arrived with basketfuls of food, mainly ripe bananas, to serve him as a symbol of “Akwaba” (meaning “Welcome” in Baoule dialect).

Djessi Black and his wife, strong supporters of Gbagbo, who wore t-shirts with imprints of the ex-president’s visage, sat on the terrace of a shop in Yopougon, a municipality in Abidjan that is a stronghold of the Ivorian Popular Front.

“We have been waiting for his arrival for so long,” Black told Zenger News.

The Ivorian government went out of its way to welcome back the ex-president.

“Gbagbo will be entitled to everything he is entitled to from the point of view of the law,” said the government spokesman, Amadou Coulibaly, on June 16, 2021, following a Council of Ministers meeting.

Many of his supporters said Ouattara’s gesture of inviting the ex-president back would help bind the wounds of the civil war ten years ago.

Ouattara, who sent Gbagbo to The Hague, made available the presidential pavilion at the Felix Houphouet-Boigny Airport for Gbagbo’s use upon arrival.

Gbagbo was arrested in April 2011 by government troops in a bunker in Abidjan with his wife Simone Ehivet Gbagbo, an influential, polarizing figure during his ten-year presidency from 2000-2011.

Many people in the Ivory Coast believe that she was a key influencer in her husband’s government and that she likely influenced Gbagbo not to concede defeat in the 2010 poll.

Following the first civil war between 2002 and 2004, she emerged as a hardliner even during peace negotiations, telling off then-United Nations secretary-general Kofi Annan, who led the mediation efforts.

“Next time perhaps we should invite Madame Gbagbo,” said Annan, as the talks stalled. She seemed to “have a better idea of the solutions,” said Annan sarcastically.

An Ivorian court found her guilty of war crimes in 2015 and sentenced her to 20 years in prison. However, the sentence was overturned in 2017 on appeal.

But, after his return home, one of Gbagbo’s actions was to divorce Simone, 72, on June 21—an act that shocked his supporters and other Ivorians.

The drama started at the airport when Gbagbo landed with a woman said to be his second wife and hugged his wife with visibly less emotion.

“After years of negotiation with Ehivet Simone to pen down her consent for an amicable separation, which she turned down, the ex-president has asked the court in Abidjan for a divorce,” said Gbagbo’s lawyer, Claude Mentenon, in a statement.

The pair married in 1989 and have two daughters.

“Their divorce will have an impact on the future of the Ivorian Popular Front,” Stephane Soumahoro, a political analyst in Abidjan, told Zenger News.

“Some people believe that the divorce will give room for the creation of a new political party. Nobody knows who will follow who. Gbagbo or Simone?”

Ivorians believe Gbagbo will play a vital role in reconciling the nation to heal from the wounds of the civil war.

The principal coordinator of the Rally of Houphouëtists for Democracy and Peace in the Bagoue region, Bruno Nabagné Koné, said: “The return of Gbagbo confirms the willingness of Alassane Ouattara to reconcile his people.”

The relationship between Ouattara and Gbagbo has been bitterly adversarial at best. The current rapprochement came as a surprise.

Ouattara was prime minister in the government of ex-president Félix Houphouët-Boigny when Gbagbo, then an opposition politician, was sentenced to two years in jail in 1992 for inciting violence.

The question of who is a genuine Ivorian has been at the heart of the bitter north-south divide in the Ivory Coast, the world’s largest cocoa producer.

The country’s south regards the northern people as “outsiders” since most of them are descendants of migrants from neighboring countries, such as Mali and Burkina Faso, who came to work in the country’s cocoa fields.

The northern half of the country is predominantly Muslim, while the south is Christian.

These identity divisions led to Ouattara, whose descendants on his father’s side came from the Ouattara Empire from Burkina Faso, being barred from contesting the 2000 presidential elections on account of being a “foreigner”, even though both his parents were born in the Ivory Coast.

However, Ivorians hope that the hand of friendship extended by Ouattara to Gbagbo will mark a step toward finding lasting peace in the country.

Mariam Traoré, a parliamentarian of the Tengrela region, said, “Ouattara is a peacemaker, who no longer wants conflicts, but a united and prosperous Ivory Coast.”

“Indeed, the involvement of President Laurent Gbagbo can constitute a decisive turning point in the consolidation of the political dialogue initiated by Presidents Henri Konan Bedie and Alassane Ouattara,” said Maurice Kakou Guikahue, secretary-general of the Democratic Party of the Ivory Coast-African Democratic Rally party, in a public statement.