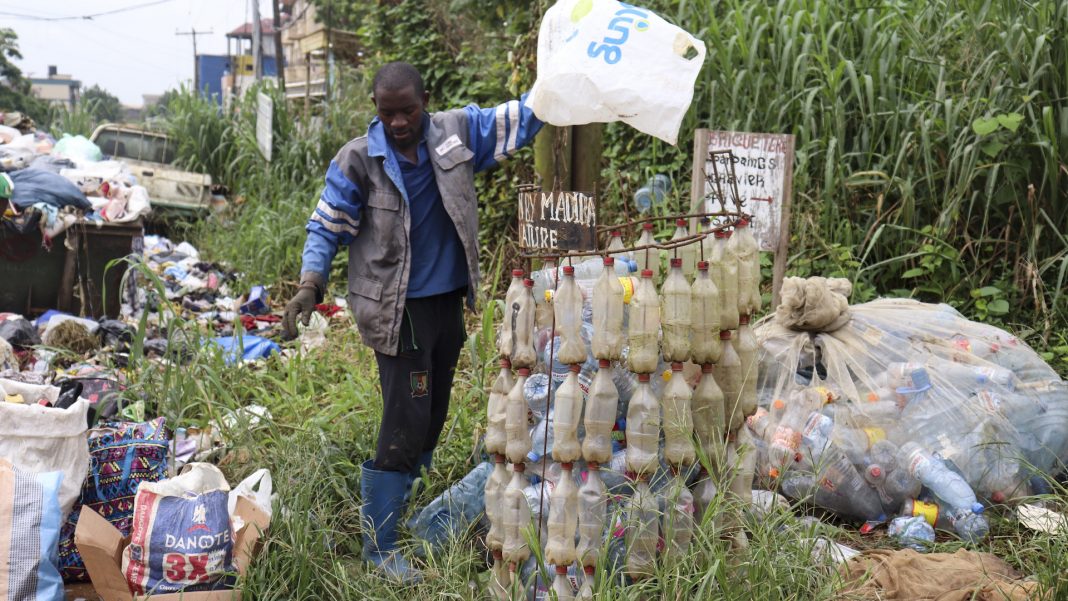 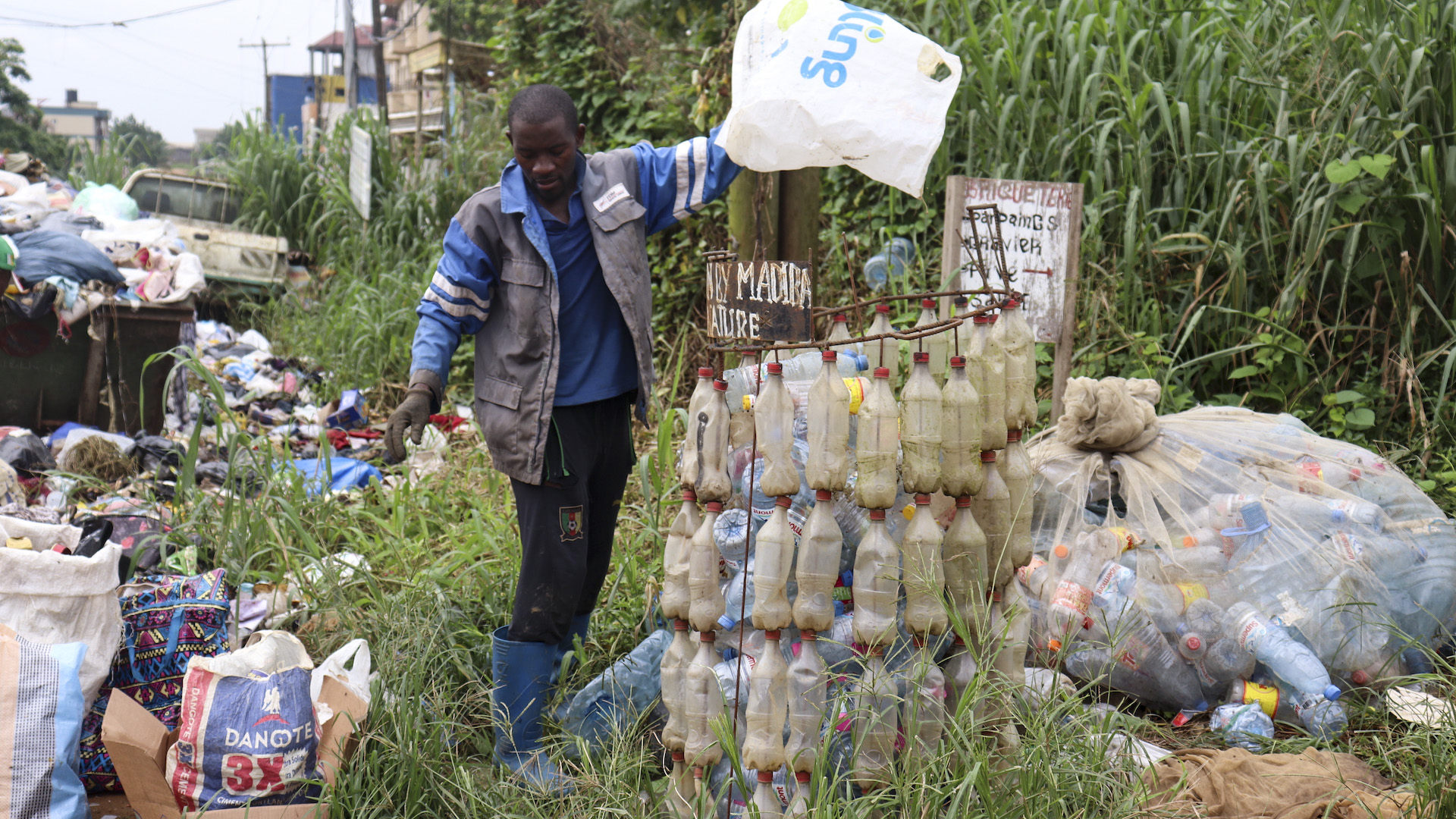 DOUALA, Cameroon — The vast amounts of plastic waste clogging up Cameroon’s rivers and polluting its pristine sandy beaches had long bothered Ismael Essome, 30, a young graduate from the Institute of Fisheries and Aquatic Sciences at the University of Douala.

Essome, who hails from a fishing family in Cameroon’s town of Yabassi in the Littoral Region, decided to take matters into his own hands in 2011.

He decided to collect plastic bottles manually, stitched them into boats, and donated them to fishers in the area.

“I collected plastic bottles during cleanup exercises in fields, beaches of Kribi, rivers in Douala and Yaoundé,” he told Zenger News.

“The cleanup was organized once every month. I drummed up support on social networks by inviting young persons to participate as volunteers, and we later hired some of them”.

About 35 youths joined in the effort.

The United Nations Environment Programme estimates that 300 million tons of plastic waste are produced every year, of which 8 million tons end up in the ocean.

Greenpeace says that plastic pollution remains a severe problem across Africa, devastating communities’ health, the environment, and the ecosystem that millions depend on for livelihood.

It is difficult to estimate the amount of plastic waste Cameroon produces annually.

“The reason for this is that some industries do not declare the plastics they produce,” Mboh Hyacinth, director of standards and control at the Ministry of Environment, Nature Protection, and Sustainable Development.

“Additionally, our porous borders make it easy for polythenes and products packaged in plastics to be smuggled into the country. Therefore, it’s hard to get accurate statistics on this.”

Nonetheless, Cameroon’s rivers are flooded with plastic bottles, which clog drainage and cause flooding whenever it rains in the country’s big cities, especially Douala, on the Atlantic coast.

However, Essome, the chief executive officer of Madiba & Nature, has made it his life’s mission to rid Cameroon of the plastic bottle menace.

He recently upgraded from physically collecting the trash himself to an app he launched in February 2021 that makes the task much easier and financially rewarding.

Five tons of plastic are collected through the app every month, Essome said, preventing it from getting into gutters and streams.

This is how it works: the user downloads the app from a smartphone’s play store and orders an eco-bin from his company. Then one fills a form indicating the town and the area they live in, the estimated amount of plastic bottles, and a phone number.

“It’s an incentive to encourage people to use the eco-bins and avoid throwing the plastics in nature. Schools, companies, restaurants, and schools have also ordered bins to store their waste.”

The app equally provides environmental education lessons, an anti-pollution sensitization platform, and a window to buy eco-materials such as boats and bins.

But even with the help of the app, only a small quantity of plastic is collected. Essome and his workers go to streams, from where they collect about 20 tons of plastic trash monthly.

Back in a rudimentary factory he has set up, plastics are sorted and then recycled into eco-boats, 55 of which have been donated to fishers in the seaside town of Kribi, as per Essome.

Furniture constructed using plastic is taken to an eco-park to be built in the seaside town of Kribi. The rest of the plastic is stocked in bales to be crushed to produce more eco-boats.

“My biggest challenge is securing about $50,000 to buy a machine that can crush and melt the plastic,” Essome said.

His company, Madiba & Nature, provides jobs to about 30 young people to pick plastics, work in the factory, and conduct an environmental education program.

He said over 5,000 students in 15 schools in Kribi, including Government Bilingual High School, Bonaberi,  Lycee Ndoghem PK12 Douala, University of Douala, and the American School of Yaoundé, have benefited from the latter initiative.

On a more industrial scale, brewery companies like Brasseries du Cameroun collaborate with NAMe recycling company to remove plastic from the environment and transform them.

However, these actions are not enough to free the environment of plastic waste.

The Ministry of Environment, Nature Protection, and Sustainable Development in 2014 banned the importation, production, and sale of non-biodegradable plastics.

The government gave dealers in the sector two years to conform, but, today the single-use polythenes still circulate in the market.

The law does not regulate plastics greater than 61 microns but rather taxes producers through the eco-tax, which falls within the Extended Producer Responsibility, ensuring companies manage about 80 percent of the products they send to the market in an ecologically sound manner.

Hyacinth said that household waste, comprising mainly of plastics used every day, is the responsibility of Cameroon municipal councils.

“Cameroonians have the attitude of dumping refuse anywhere. No matter the type of law, it is difficult to free the environment of plastic with this kind of mentality.”

Environment expert Marc Ansleme Kamga of the Center for Environment and Development suggested that the government should make recycling more profitable and train young people in this area.

“Government should encourage young people to venture into recycling which must cease to be a seen as degrading activity, but rather a professional income-generating projects,” Kamga told Zenger News.