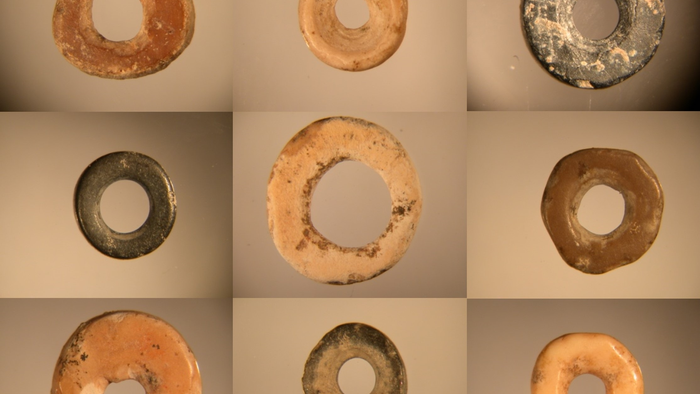 While DNA studies can reveal genetic interactions between populations, they do not provide insight into cultural exchanges and population shifts that happened thousands of years ago. Researchers from Germany’s Max Planck Institute for the Science of Human History examined ostrich eggshell beads to learn more about how far-flung human groups were connected in the ancient past.

Jennifer Miller and Yiming Wang, whose study was published online in Nature, reported on tens of thousands of years of human connection and isolation, which was driven by variations in precipitation in southern and eastern Africa.

Ostrich eggshell beads are ideal for delving into relations between groups of ancient people, the researchers said. The beads are the oldest known fully manufactured artifacts to have been completely transformed by human hands, rather than relying on an object’s natural form.

The modern hunter-gatherers of South Africa and Botswana, called “San” by neighboring pastoral Khoikhoi and “bushmen” by Europeans, are the most likely descendants of the first modern humans to migrate to the region 130,000 years ago. Some San still use ostrich eggshells to store water on their arid land.

Different ancient cultures produced distinct styles of beads, enabling modern researchers to trace connections between peoples. “It’s like following a trail of breadcrumbs,” said Miller. “The beads are clues, scattered across time and space, just waiting to be noticed.”

Having assembled the largest ever database of ostrich eggshell beads, Miller and Wang examined data on more than 1500 individual beads discovered by archeologists at 31 sites in southern and eastern Africa. The painstaking data collection took more than 10 years.

The researchers compared the aperture diameter, shell thickness and total diameter of the beads, finding that people in the two regions between 50,000 and 33,000 years ago used nearly identical beads. For Miller and Wang, this suggests that a social network spanning more than 1,800 miles connected people living in the two regions.

“The result is surprising, but the pattern is clear,” Wang said. “Throughout the 50,000 years we examined, this is the only time period [for which] the bead characteristics are the same.”

The ostrich eggshell bead pipeline from this period is the oldest human network ever discovered and coincides with an especially wet period in eastern Africa, according to the researchers. By 33,000 years ago, the network appears to have disappeared, probably because of climate change. It was during this time that eastern Africa saw a dramatic drop in rainfall when the tropical rain belt shifted south.

More rain in the Zambezi River catchment — a large area connecting eastern and southern Africa — meant the periodic flooding of riverbanks, which may have created a geographic barrier that disrupted trade.

“Through this combination of paleoenvironmental proxies, climate models and archeological data, we can see the connection between climate change and cultural behavior,” Wang said. The researchers believe that their data show the flexibility of early humans and their different strategies for success, as evidenced by the bead-use trajectories that followed climate change. Miller said researchers can build on their database to reveal more human connections.

The post Cracked It: How Ancient Ostrich Egg Beads Could Reveal The Secrets Of Stone-Age Trade In Africa appeared first on Zenger News.