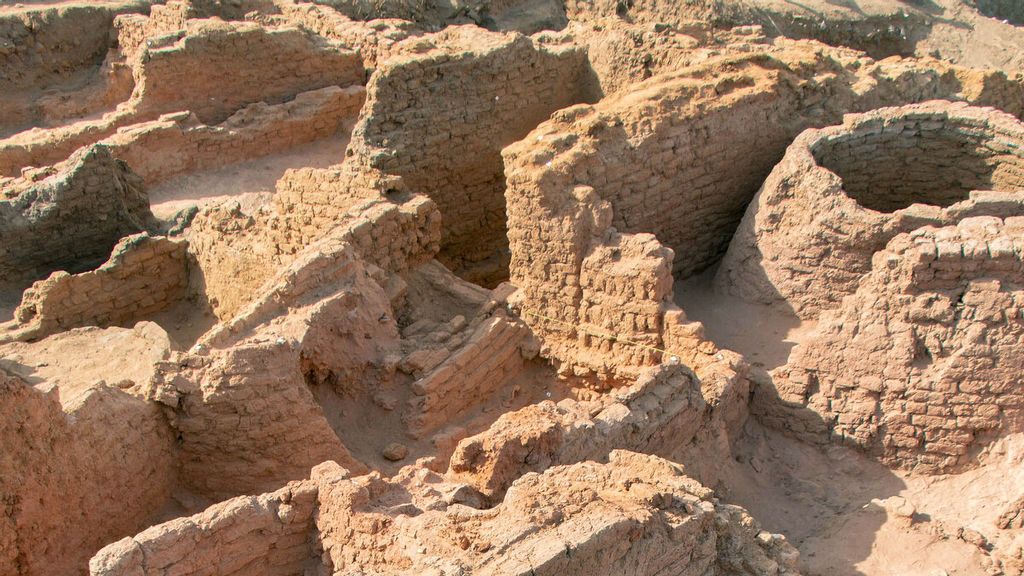 Austrian archeologists have discovered a 4,000-year-old administrative center with over 30 storage facilities that ancient Egyptians used to stock grain.

A team of researchers from the Cairo branch of the Austrian Archaeological Institute of the Austrian Academy of Sciences found the 32 extremely well-preserved granaries in the ancient town of Kom Ombo in Egypt.

Kom Ombo, which means “Gold Hill,” gets its name from its position on a hill that controls access to roads leading to ancient gold mines, according to the Egyptian Ministry of Antiquities.

The town’s location on the east bank of the River Nile, about 31 miles (50 kilometers) north of the city of Aswan, gave it control over trade routes from Nubia to the Nile Valley in ancient times, but its main rise to prominence came with the erection of the Temple of Kom Ombo in the Ptolemaic–Roman period in the 2nd century B.C.

The storage facilities, made of mud bricks and used as grain depots, originated from the First Intermediate Period, also known as a “dark period” in ancient Egyptian history (2180 to 2050 B.C.), according to the researchers.

The remains of the town where the temple was later built have not been well researched as little monumental evidence survived following the violation of temples, destruction of artworks and demolition of statues.

It is commonly believed that this destruction occurred as a result of the political chaos caused by the two competing power bases: the city of Heracleopolis in Lower Egypt and the city of Thebes in Upper Egypt.

In addition to the granaries, Austrian archeologists, who have been investigating the ancient town in collaboration with the Egyptian Ministry of Tourism and Antiquities since 2017, discovered stacks of unwashed plates and bowls in one of the storage rooms.

“There are stacks of unwashed dishes in a silo. There are still bones and other leftovers stuck to them. So something must have happened at the end of the First Intermediate Period that caused this system to be left behind,” said senior research associate Irene Forstner-Muller from the OeAI.

Puzzled over the mystery, she added: “It’s very strange. Why would you stack hundreds of dirty plates and bowls there and then leave them behind in such a hurry?”

The archeologist also reported that the silo-like storage rooms, which were accessible from above, were enclosed by an outer wall and covered.

“The structure of the building is very well preserved; the walls are almost two meters [6.5 feet] high.

“We also discovered robbery pits through the walls in two rooms, through which grain was obviously stolen and then quickly sealed again with clay,” said Forstner-Muller.

The bones and excrement of rats were also found in one of the storage rooms, suggesting it had been infested with vermin, Abdel Moneim Saeed, director general of Aswan Antiquities, said in a statement posted on the Egyptian Ministry of Antiquities’ website.

In addition to the current discovery, the remains of a fortress built during the British occupation in the 19th century were found near the Ptolemaic–Roman temple last year.

The fort probably served as an observation and defense base during the Mahdist War between the Mahdist Sudanese and the forces of the Khedivate of Egypt supported by Britain from 1881 to 1899, according to the Austrian Academy of Sciences.

The academy has put out a call for students interested in gaining experience in Egyptian archeological field work to join the Kom Ombo excavation.