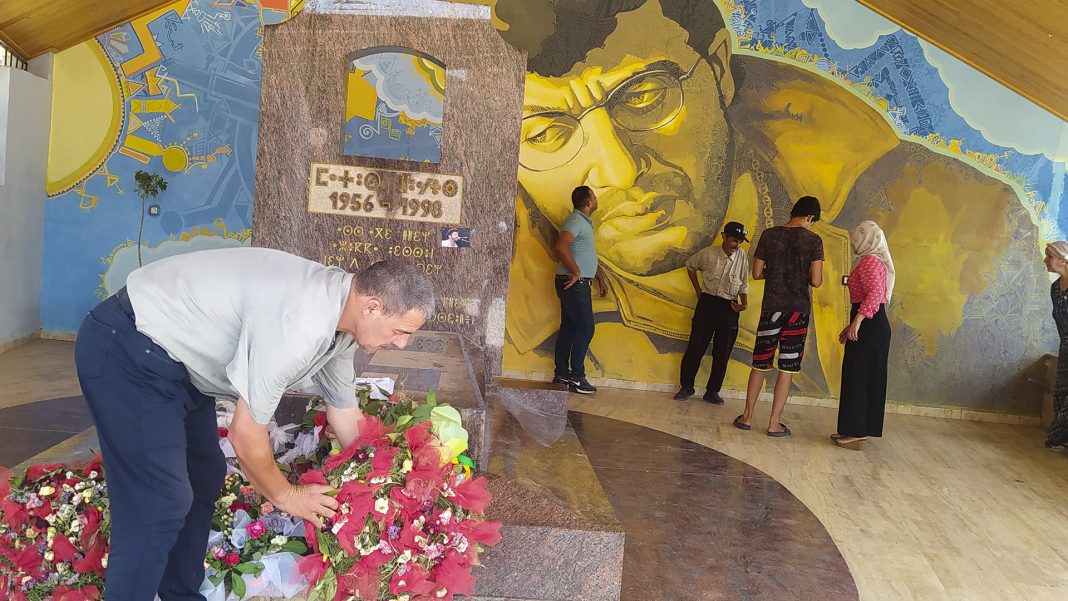 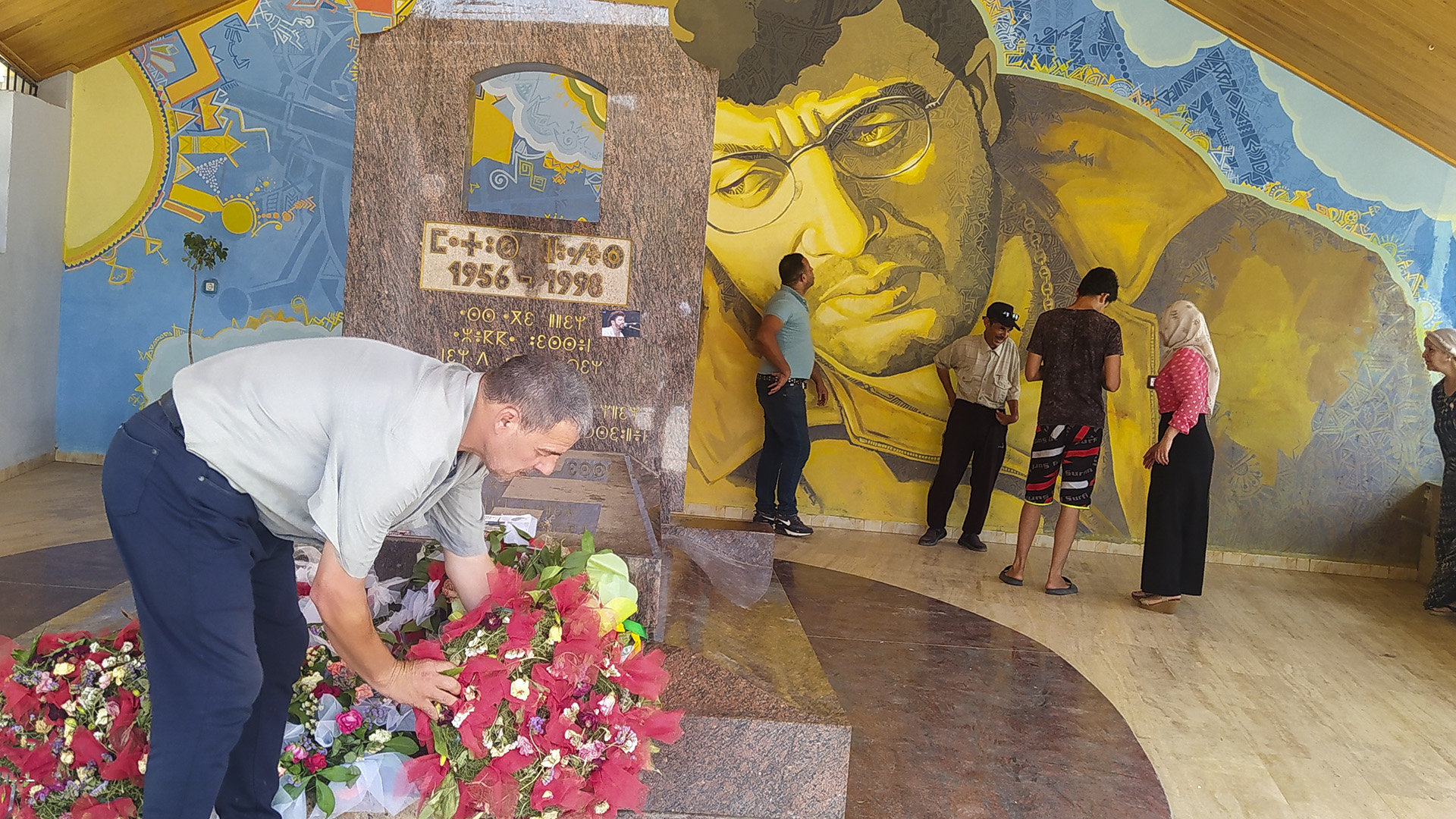 BÉNI-AÏSSI, Algeria —Kamel Hamdad, a public service vehicle operator, was on his way from Tizi Ouzou, a city in north-central Algeria, to the nearby commune of Beni Douala just after midday on June 25, 1998, when he made a gruesome discovery at a police checkpoint near the mountainous village of Thala Bounane.

“I saw the Mercedes-Benz vehicle of singerMatoub Lounèscompletely riddled with bullets and splattered with blood,” he told Zenger News.

“I was the first witness at the scene of the assassination and saw the assailants escape. I was afraid the criminals would kill me. But then I gathered the courage to get off my bus to see what happened. I rescued three women: Lounès wife, Nadia Matoub, and two sisters-in-law.”

The singer is considered a symbol of theAmazighidentity struggle in Algeria and beyond. The Amazighs or the Berbers are the indigenous peoples of North Africa who are demandingmore rights.

In addition to the small community of Siwa, in the far west of Egypt, the Berbers are found in theiroverwhelming majorityin the Maghreb: Morocco, Algeria, Tunisia, and Libya, where these indigenous populations agitate for broader identity and cultural recognition.

The Amazighs, whose presencepredatesArabization and Islamization, call themselves “Imazighen”, plural for “Amazigh”, which means “Free People” in their language, Tamazight.

He started singing at a young age and released his first album, “Ayizem anda Thellidh?” (O lion, where are you?), in 1978 to celebrate the Algerian fighters of theindependence strugglefrom France.

The song, which quickly gained popularity and brought him to the fore of political activism, criticized the country’s post-independence leaders, whom he accused of usurping power and limiting the freedom of expression.

A militant advocate for the Amazigh rights, the artist was first seriously injured by a gendarme in October 1988. He recounted his long recovery in the album “L’Ironie du fate” in 1989.

Testimonies given to the press at the time by witnesses said he was in the company of two students on their way to Ain El-Hemam to distribute leaflets to citizens to incite them to a general strike in Kabylia before a vehicle of the national gendarmerie intercepted them.

A gendarme shot him at point-blank, seriously injuring him, while the two students were arrested.

Opposed to Islamist terrorism and the Arabanization of his country, which made his songs be banned on radio and television, Lounès condemned the killing of intellectuals.

During Algeria’scivil war, theArmed Islamic Groupadded his name to a hit list of intellectuals they targeted. The group eventually kidnaped him on Sept. 25, 1994, but released him after two weeks following massive demonstrations by Kabyleans.

She founded theDanielle Mitterrand Foundation-France Libertés,a human rights group, in 1986 and chaired until her death in November 2011 in Paris.

In 1995, Lounès took part in the “Palm March” in Italy to abolish the death penalty, while in March 1995, theJournalists International Ski Clubawarded him the Freedom of Expression Award.

His murder was never solved, and no investigation was opened to elucidate the circumstances of the crime. But his death caused immense mourning in Kabylia and riots that lasted several weeks.

Lounès’ last album, “Open Letter to…” published a few weeks after his assassination, contains a parody of the Algerian national anthem in which he denounced Algerian leaders at the time.

The commemoration of the 23rd anniversary of Lounès assassination on June 25, 2021, was marked by the inauguration of a commemorative plaque installed in Tala Bounane, the site of his murder.

A gala was held the day before, on June 24, 2021, at the Kateb-Yacine regional theater in the town of Tizi Ouzou, where $17,698 was raised in support of theMatoub Lounès Foundation.

Before that, the regional theater screened a play on him written by playwright Lynda Hantour.

“People have not forgotten this because Lounès sang for freedom for truth,” the singer’s sister Malika Matoub told a large crowd of citizens, activists, politicians, and artists.

“We welcomed the people who came to pay tribute to their idol. Lounès was a unifying force, and the rising generations must preserve our artistic heritage as well as our struggle for freedom and Amazigh identity.”

Former parliamentarian Khaled Tazaghart was also present at the event.

“Today, we commemorate the 23rd anniversary of the sad assassination of Lounès, and we also came to express our willingness to continue his fight for freedom and democracy,” he told the press.

Wreaths were laid on the monument commemorating the murder of the rebel singer, as groups of his fans arrived from all over Kabylia, including Béjaïa, Algiers, Boumerdès, Bouira, and the other communes of Tizi Ouzou province.

A delegation of the Matoub Lounès Foundation, led by Malika, gathered at the site of the assassination of the adored artist, observed a minute’s silence before taking the road to his native village, Taourirt Moussa.

The mythical song “Aghuru,” which is a reproduction in the Amazigh language of the Algerian national anthem in a parodical way to criticize the Algerian regime, played on through the one-minute silence.

His songs were played on a loop as visitors remembered the singer through an exhibition of photos and press articles in the singer’s house, which has since been transformed into a museum.

Wearing Amazigh flags and portraits of the deceased singer, fans flocked by the hundreds to his family home to pay him tribute and recognize his people’s struggle.

TheHouse of Culture Mouloud Mammerihoused a rich exhibition tracing Lounès’ entire artistic and militant path spanning over 20 years, from 1978 to 1998.

“I would like to thank all the citizens who came here to commemorate the murder of Lounès Matoub,” the singer’s wife, Nadia, told Zenger News.

It gives us courage. I also want to pay tribute to the young Kabyle demonstrators, Ait Idir Rachid, Hamza Ouali, and Salhi Rouane, who were killed during the riots that shook Kabylia the day after Lounes’s assassination.”

The Algerian diaspora in France also commemorated the singer’s death through performances by several artists, including Mohamed Allaoua, Massa Bouchaffa.

“Kabyliaand Lounès will remain symbols of the resistance and the fight for the Amazigh identity and democracy in Algeria, despite the despicable attempts of the politico-military regime to kill any change in the country,” Amazigh political activist Meziane Chaâbane told Zenger News.

Chaâbane, a member of the Amazigh nationalist party, theRally for Culture and Democracy, said the cause that Lounès fought and died for has not progressed as he would have wished.

“All these changes are welcome, but the reality is that the Algerian regime has no desire to promote the Amazigh language and identity in the country. In Algerian schools, the government does not want to impose the teaching of Tamazight as a compulsory language just like Arabic and French,” he told Zenger News.

Following the singer’s death, new generations of the Amazigh took over the fight for their identity and language, such as El Hachemi Assad, President of theHigh Council in Amazighity, an Algerian state institution.

“Indeed, there are still shortcomings, but we can say that a lot of things have been achieved in favor of the Amazigh language, and the work is still ongoing,” Assad told Zenger News.

The Amazigh language was finallyrecognizedas a “national and official language” in Algeria’s Constitution in 2016, but political activists say this is not enough.

“The process of officially recognizing Tamazight must result in a series of measures, including the amendment of the organic law N 18-17 of Sept. 2, 2018, which limits our fight for recognition to the simple and restrictive creation of the creation an Algerian Academy of Amazigh Language,” Assad told Zenger News.

Politicalactivists saythe organic law in question (Law No. 18-17 of 2/09/2018), adopted on Sept. 2, 2018, does not address the implementation of official recognition of the Amazigh language as intended but only the creation of the “Algerian Academy of Amazigh Language.”

In 2019, Mohamed Djellaoui, a teacher and researcher in Amazigh language and culture at theAkli Mohand Oulhadj Universityin Bouira, was appointed president of the academy but is yet to take up his position.

“I can’t tell you anything since I’m not settled in my post at this time, and I don’t know why,” Djellaoui told Zenger News.

“Nonetheless, all I can say for now is that the Amazigh cause has made progress, but much remains to be done.”